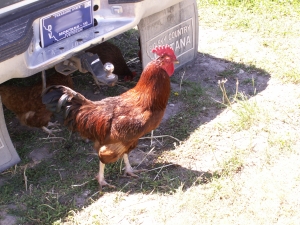 D.A. – You will be missed, Dear Friend

My tongue will tell the anger of mine heart, Or else my heart, concealing it, will break.  –  William Shakespeare, Taming of the Shrew

It is with a heavy heart and sorrow filled mind that I must tell you of the passing of our dear friend, D.A.

He was one hell of a flock leader. I could not have asked for a better rooster. He was gentle yet firm in his administrations of the other chickens.

D.A. fell victim to what appeared to be Fowlpox.  He became lethargic. There was feather loss.  His eyes were swollen as well as his vent.  His comb was faded and was covered in a white crusting.  None of the other birds are showing any symptoms. All of this took place in the matter of a weeks time.

In one week he went from ruling the roost to running in fear from the other roosters. They saw his weakness and the bastards capitalized on it.

With all that being said, we are now on flock watch to see if anyone else comes down with this stuff.

About an hour ago I gently and quietly put him down. This had to be the toughest culling I’ve ever done. The one thing I’ve always said is that you can not make them pets. However, sometimes certain animals get a permanent stay of execution.